Getting towed in Caracas is not the same as getting towed in Seattle. (Though it’s a true statement, I’m not really going to begin again like that.) So then, since my first interaction with the Baruta Police went so smoothly, I decided to enjoy this second interaction as much as I could.

It all started when we went to the Frutería on Calle Orinoco and parked where I’ve parked many times before (including the time I got my second parking ticket; the first was here). We rang up our produce and walked out the door to a street clear of all parked cars. Whoa. Shoot. And then Graham starts crying pretty hard because the first thought, of course, was that someone swiped Bluebird (the name of our car).

As I walked over to where the car had been not 5 minutes earlier, some guys loitering around seemed to know what had happened, so I walked towards them and they told me that “lo llevaron.” So they took it.

Here is the note left for me on the sidewalk. My plate number and where to pick it up. Good thing it wasn’t raining.

“The police?” I ask. Yep. They towed it to their station nearby. This was most excellent, only because it meant it wasn’t stolen. I get more advice on where to pick it up and what the process is. They all seemed to think it wasn’t a big deal and that I’d have it back in no time.  I gave thanks to the wise frutería loiterers and, after making plans to meet Kat and Graham at Tolón and stashing our bags of food behind Martin’s register, I convinced a moto taxi to take me to the tow lot. It was maybe a kilometer away on Rio de Janiero, you know, across from the big Farmatodo.

The police were very helpful even though, once again, I didn’t have the necessary paperwork. Turns out my cedula and proof of insurance (two of the five supposedly necessary documents) was good enough for them. After all, I was obviously going to be able to pay the fee, so why create more work for themselves.

Here is the ticket and the fee for towing. Two lovely souvenirs.

It’s worth noting that like the police that pulled me over on the scooter, these guys also asked if I worked for the embassy. This time I asked why they keep asking me that. He told me diplomatic vehicles are exempt from parking laws. Seems like an unnecessary exemption to me, but then again, I’m no diplomat, so I don’t really know their parking needs.

Since the police were being so civil I wanted to find out what I could about the process without being too obnoxious. First, I asked where I could and couldn’t park so as to avoid this inconvenience in the future. He didn’t really give me a straight answer which told me there are no firm rules, but he did mumble something about not parking on yellow curbs. Second, I asked how many cars they impound each day. About 50 I was told and that’s just in the relatively small Las Mercedes neighborhood. Sounds like a good business, I said. Third, I asked if I could take a selfie with him as a memento. He said he couldn’t because of the uniform he was wearing…how encouraging that he wasn’t against a selfie on principle. Maybe next time then, I said. 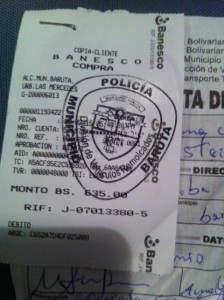 Here you can see the fancy stamp showing I paid the fine. Apparently I had 30 days to pay it which made me wonder if they would they actually track me down if I were to just let it go?

Just like when I got pulled over on the scooter, I ended our interaction with a heartfelt handshake and by wishing them a happy evening.

I took Bluebird out of the lot, picked up Kat and Graham and only lost about 45 minutes of our evening. In the end, well worth the experience.

This entry was posted on February 13, 2015 by Michael Stein-Ross in Michael and tagged Around Caracas, Police, Transportation.