With The Eyes of The World On Venezuela, Many Are Accused of Remaining Blind 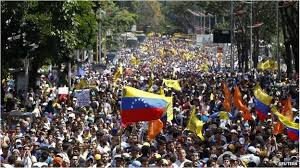 College students in Venezuela use National Youth Day to march and protest.  At the end of the day, 3 lay dead.

Less than 2 weeks ago we posted a photo of a boa constrictor that had been found on the school steps.  During the wee hours on a Monday morning it had faced off with the school’s adopted cat, Skittles.  In the end, peace prevailed; one of the night guards had come across the animal gladiators before any blood was shed.  If we were prone to be prophetic, we might have looked to that event as a premonition of what was in store for the rest of the month for the entire country.  However, the hope of a peaceful ending has already been dashed.

Discontent over the past 9 months has festered, with no major outbreak since last May.  But, as is…

This entry was posted on February 18, 2014 by Michael Stein-Ross in Michael and tagged News.