No sleighbells, no chestnuts, no open fires, no army of Salvation Army Santas, no snow (not even close), but still, Christmas (and the deep, abiding consumer spirit within) draws near.

I’ve always had a pretty narrow view of which traditions signified Christmas. We have the traditions we have known in the US, but now that we are living internationally I consider us lucky to be able to form a broader catalogue of holiday images. From Venezuela we can add to our list hayacas, ensalada de gallina and pan de jamón; decor that has been up in shops since the first week of November; and if you like, really expensive real Christmas trees.

Hayacas are the Venezuelan version of what most people know as tamales — corn meal cake enveloping a bunch of delicious stuff.  Unlike the husk-wrapped Mexican tamales the Stein family always orders from Pike Place Market for breakfast on Christmas morning, hayacas are wet and wrapped in plantain leaves, and they’re a bit more complicated on the inside. You’ll usually find a couple green olives, some plump raisins, and several capers to compliment the main player — some chunky combination of pork/chicken/beef (it’s difficult to tell sometimes). It is possible to find them year round, but most families only make them during the holiday season. 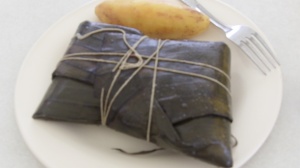 I don’t have a picture of ensalada de gallina, but just imagine a souped up chicken salad. It’s good. Especially if you stuff it into an arepa.

Then there’s the pan de jamón. I haven’t tried it yet because bread and ham just don’t do it for me. It looks pretty cool though. And Graham is a fan.

Since there is no Thanksgiving holiday in these parts there is no buffer between Halloween and Christmas. This means that by the end of the first week of November all the stores and restaurants have already decked their halls. (Some earlier, too…Kat remembers seeing a home store down the street displaying Christmas decorations way back in August!) And then throughout November and December people keep putting up more and more decorations. I’m not complaining; I truly enjoy lights and trees and poinsettias and motion-detecting Santa statues that say “feliz navidad” as I walk by. I suppose I just wasn’t prepared for the magnitude of the season. 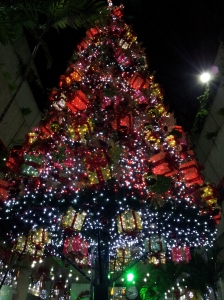 Christmas Tree in the Mall, First Week of November

The trees at our corner gas station are beautiful, but man are they pricey. $200 is the starting price, but it makes sense. They almost certainly arrived from distant lands. So our tree this year is lights on the wall. I’m a big fan.

This entry was posted on December 14, 2012 by Michael Stein-Ross in Michael.