“La cola” is not fino cambur, which sucks, because Caracas is awash with them. However, the ubiquity of la cola does not surprise me, because making one is very straighforward. You simply have to find several people who want the same thing, then add a touch of scarcity, some inefficiency, and a hint of apathy and viola! you have yourself a standard Caracas Cola. What’s better though is when you can locate some incompetence (not scarce) to toss in with the rest. Then you get yourself a Super Caracas Cola.

A cola is a line, a queue, a headache, and a test of patience; or perhaps a cola is an opportunity to practice meditation, look at people’s auras, stand in awe at once of human ingenuity and shortcomings, or to stretch those tight hammies. If you are creative and don’t care what others think of you, then the cola is your oyster. Go ahead, hurry up and wait. After all, life is more about the journey than the destination, right?

I’ve never seen people line up at the gate so early. It only took me one time to understand that in this country a flashing “boarding” notice on the screen means you have at least another 25 minutes till actual boarding. Perhaps Venezuelans are just a people full of hope for the near future — “Maybe, just maybe this time the airline will board on time.” 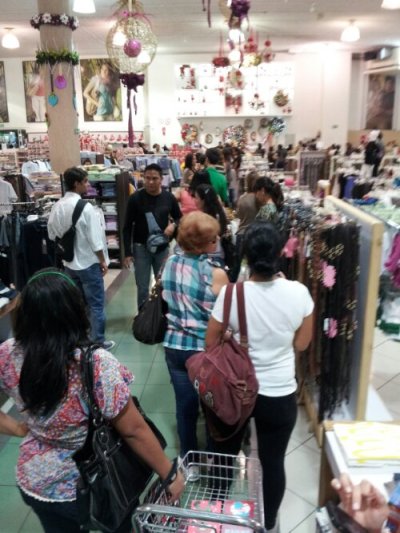 Mama, watch out. I waited for an hour to check out…even though there were six registers open.  Labor laws here make it pretty difficult to fire someone. I like the idea of protecting workers, but what Venezuelans have gained in job security, customers have lost in efficiency and customer service.

Sometimes colas make sense when it comes to fairness and civility. At rush hour, buses are often so crowded that dudes are hanging out the door, which means there might be only one or two people boarding at a particular bus stop. A line in this case is quite appropriate.

Like at the eye doctor. At three different appointments it has taken me 20 minutes, 30 minutes and 40 minutes, respectively, to get past the first reception desk. The first time I got my “pass” to go to my appointment I felt quite the accomplishment, until I realized that passing that first desk only got me to the second reception desk. To be expected, there were a few people sitting around in the second waiting room (notably not reading, not texting, just pure, adulterated waiting). But there was no physical line, and without that, there was no feeling of movement — I couldn’t tell if each ticking minute was bringing me closer to the examination room. One’s imagination can run wild creating scenarios to justify the wait — bunnies, cambur, sandpaper — though the real reason is truly beyond comprehension; I doubt if the employees even know. Regardless, when my name was called two hours later, it was like a gift from heaven, which is nice.

Part of keeping one’s sanity in Caracas is figuring out when colas are at their worst and then avoiding them. Unfortunately, cola patterns are shifty so one often ends up saying the commonly heard words that justify everything, “Well, this is Venezuela.”

This entry was posted on November 20, 2012 by Michael Stein-Ross in Michael.